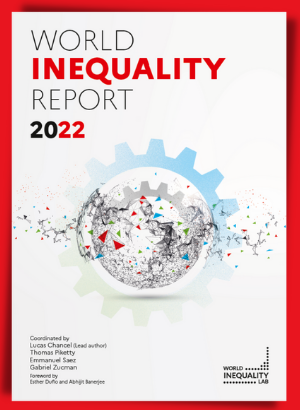 Income and wealth inequalities in India were historically always skewed in favour of the rich but the chasm is deepening at an alarming speed. The latest World Inequality Report 2022 describes India as nation that is a very "poor and very unequal country, with an affluent elite". That has always been the case with India but now the worry is that the difference between the rich and the poor, including the middle class, is growing and growing at a fast pace. The poor are earning less and accumulating nothing (most of them are in fact selling assets or breaking saving instruments to make ends meet) while the rich are earning more and accumulating hugely. The inequality in India is so high that it adversely affects global calculations: if India's figures are removed from the calculations, the share of the bottom 50% across the globe actually rises.

In India, the top 10 percent hold 57 percent and the top 1 percent 22 percent of total national income while the bottom 50 percent share has gone down to 13 percent. The middle classes hold just 29.5 percent. In a poor country like India, if 10 percent of the people still hold more than 50% of the national income, it shows that policy intervention has not made much difference to the lives of the poor who continue to remain poor or have become poorer. The fact that out of the top ten percent just one percent hold 22 percent of the national income also shows that there is a huge divide even among the rich and the superrich are earning and accumulating wealth like never before. There were independent reports earlier which had also shown that the superrich across the world including India have increased their wealth phenomenally during the pandemic.

With the GDP not growing as per expectations in the last few years, the economy has taken a beating. The income of the middle classes and the poor has suffered as a result. Then, interventions such as demonetization and the implementation of the GST have dealt strong negative blows to the informal economy, further reducing income and opportunities for these classes. Then the pandemic happened, further squeezing incomes and opportunities. The government must learn the right lessons from these figures and try to address the inequalities by making policy interventions that offer income opportunities to the poor while offering them access to quality healthcare and education.