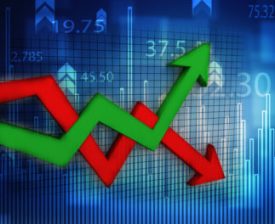 How Will The Poll Results Affect The Stock Market?

How Will The Poll Results Affect The Stock Market?

Linus tackles things head-on. He takes sides in his analysis and it fits excellently with our editorial policy. No 'maybe's' and 'allegedly' for him, only things in black and white. View all posts by this Author
The stock markets dropped yesterday after touching record highs on the day exit polls predicted a comfortable majority for the NDA. That day, stocks had shown the highest single day jump in 10 years. But most analysts say that the drop yesterday was on account of profit taking and is not a reversal of the uptrend. In fact, they say that if results mirror the exit polls, the Nifty well might breach the 12000 level or even inch close to 12500.

To support their theory, analysts point out to the open interest being shown by traders at 12000 and even 12500 levels. They say that since no trades are being squared up for these levels  in fact, trades are being added  it is clear that the market is going to move upwards and touch dizzying heights. Only a complete reversal of the trends shown in the exit polls will cause a crash in the market. Analysts feel that given that most exit polls show a similar trend of majority for NDA, such a scenario is unlikely.

But what should a small trader do in such a scenario? The markets are already at very high levels. One feels that apart from a small rally, the markets have already taken in the fact that the NDA will return again ensuring policy continuity. But exit polls have gone wrong in the past. A small trader is more likely to burn his fingers at these levels if he or she does not do his homework properly. The chances of making money in the short term are decidedly low. Hence, small traders will find it better not to invest until a clearer trend emerges.