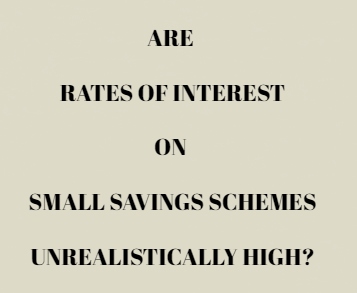 High Interest Rates On Small Savings Schemes Are Not Sustainable

High Interest Rates On Small Savings Schemes Are Not Sustainable

A different kind of status quo on interest rates has been giving a higher return to investors in these times when interest rates are very low on almost all investing schemes. After the pandemic and the disruption caused by it, the government has left the small savings rates untouched for the last six quarters. Normally, such rates are revised every quarter to adjust them for the movements in the money market. Hence, with returns on government securities (G-Secs) as the benchmark, the government revises the interest rates it gives to small saving scheme investors like PPF, NSC and term deposits in post offices. The government had tried to cut the rates sharply in April this year but had withdrawn the order in just 12 hours, citing "oversight", mindful of the political implications.

Hence, for the last 18 months, these rates are ruling at a much higher level than they should be as per the formula devised to keep them nearer to the G-Sec rates. Since many of these schemes also come with tax benefits, the actual return is higher for the investors. The RBI has pointed this out in its bulletin released on Monday.

The main purpose of highlighting this may be the difficulty the banks are facing in attracting customers to invest in bank fixed deposits where the yield is low and unattractive compared to small savings schemes. For instance, banks are offering an average rate of 5.30 % on a five-year fixed deposit, while the same fetches a rate of 6.7% in post offices. PPF fetches 7.1 % (although with a 15-year lock-in) but the tax breaks make it much higher. The RBI is obviously worried that banks are unable to mop up deposits with their lower interest rates. Hence, with the economy showing improving growth, it is expected that the government will adjust small savings interest rate in the next quarter as per the agreed formula. The government cannot continue to borrow at such high rates. It is always better to adjust the rates every quarter as the 'shock', if any, would be lower. As the April revision showed, if it done after a long time, the reduction will be much higher leading to fear of protests and eventual withdrawal.