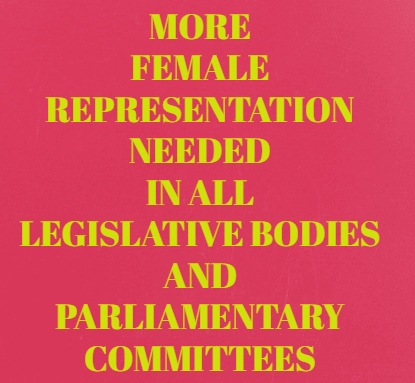 Give Women Their Due In Politics

Give Women Their Due In Politics

The government had thankfully not rushed in the Prohibition of Child Marriage (Amendment) Bill that proposes to raise the legal marriage age of girls from 18 to 21 in Parliament and had referred it to the parliamentary standing committee on education, women, children, youth and sport. It was good that democratic norms and parliamentary traditions were followed in this. But one look at the composition of the said committee is enough to raise doubts whether any informed and meaningful discussion on an issue that will have a huge impact on women can be held by it. For, the committee of 31 has 30 male members and a lone woman member.

Ideally, issues that concern women should be debated by a committee that has a majority of women members. If that is not possible due to the paucity of women MPs, at least proper representation must be given to women in the committee. As things stand now, although women comprise 14 percent of all MPs, the committee has just 3% representation for them with a single member.

Without going into the correctness or need for raising the legal marriage age of girls, what needs to be emphasized is that any such proposal should examine the issue from all angles. The views of women are most important in this as the issue concerns them. Male members are expected to be guided by the patriarchal view and that is not the best way to examine the issue. Independent studies have proved that women are more effective lawmakers than men. They should be involved in all lawmaking processes and not just in issues that concern women.

To make women major stakeholders in law making, all parties must allow more female candidates to contest elections. It is a shame that the Women's Reservation Bill, which was introduced in 2010 to reserve 33% seats in Lok Sabha and state assemblies for women, has still not been passed. With women voters increasingly asserting themselves and all parties wooing them, the time has come to redraft the bill and reserve 50% seats for women in all legislative bodies to make it meaningful and give women a bigger say in law making. But will the male-dominated Indian political class take such a revolutionary step?