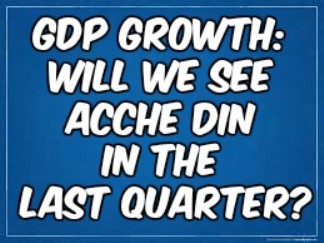 GDP: Has Growth Really Bottomed Out?

GDP: Has Growth Really Bottomed Out?

The GDP details released by the National Statistics Office (NSO), although expected given the slowdown in the economy, make for worrisome reading. Belying all expectations of green shoots appearing on the horizon, the overall economy has grown at a slower pace of 4.7% in the October-December quarter. The gross value added (GVA) grew by just 4.5%, down from 4.7% in the previous quarter. But a deeper study reveals that if one excludes government spending, the GVA grew by a measly 3.7%, which was a good 1.5% less than the previous quarter. Although the NSO estimates that the growth has bottomed out, the figures suggest a deeper malaise.

Although the agriculture sector grew by 3.5% (2% in the previous quarter) and the services sector grew by 7.4% (7.3% in the previous quarter), manufacturing and power continued to act as spoilers. Manufacturing contracted by 0.2%, proving that new orders were not being received in factories. The other worrying feature was the contraction of gross fixed capital formation (GFCF), which has now declined for two consecutive quarters. While the GFCF grew at 9.8% in 2018-19, the NSO estimates that it will contract by 0.6% in 2019-20. These figures show that neither is the demand for goods and services rising nor are investments. Consequently, the tax base has also not expanded and the assumption of 12% growth in tax collections in the 2019-20 Budget will not be achieved.

Although the NSO expects a better performance in the last quarter of this year on the back of the good performance of the core sector and hence expects GVA to rise to 5% in the last quarter, it has not taken into consideration the impact of global economic slowdown due to the coronavirus scare and its definite impact on the Indian economy. The big benefit is in the continuing slide in Brent crude prices, but if the economic activity does not pick up substantially, falling oil prices by themselves will not be a boon. Despite the NSO thinking that growth has bottomed out, one feels that it will decline for one more quarter, if not more. This is because salaries have not shown an upward trend while inflation, especially food inflation, has crossed the comfort level, leaving no extra disposable income in the hands of the ordinary citizen. This means that the demand for goods and services will remain stagnant. Investor confidence has also not revived, nor has the propensity of banks to lend despite repeated prodding from the finance minister. All these do not indicate an economic revival in the very near future.