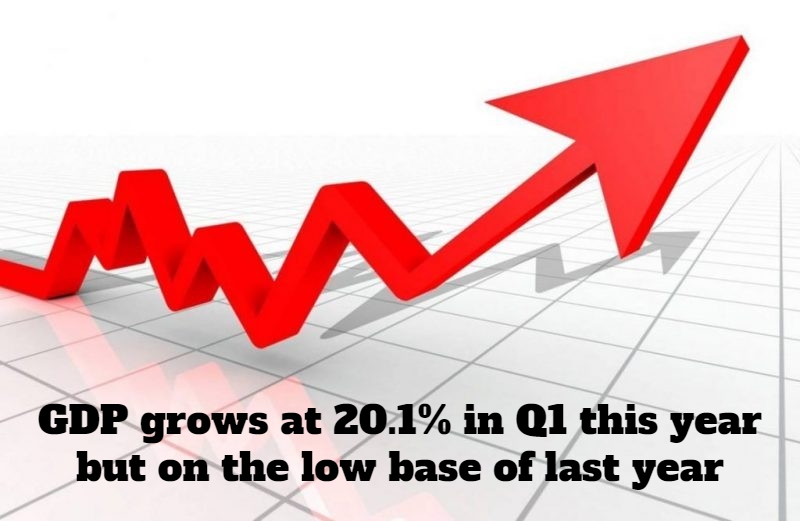 The numbers made public by the government show that the Indian economy grew by a healthy 20.1% in Q1 of the current financial year to reach Rs 32.38 lakh crore. This would have been excellent news (and it is, in many ways, in these gloomy times) but when one considers the fact that the growth is being calculated on a very low base in Q1 of FY 20-21 which was the pandemic year and a national lockdown was in place, it does not seem too rosy.

But in the times of the pandemic, with moderate to severe restrictions on movement of goods and people in place, it is a good sign that the economy is recovering. If the third wave does not materialize or is not as severe as the second wave and does not necessitate the imposition of back-breaking restrictions, the signs are clear that FY 21-22 will see the economy race to pre-pandemic levels and perform even better. Both the RBI and the IMF have said that the Indian economy is likely to grow at 9.5% in FY 21-22.

Economic activity has picked up significantly. The GST collections crossed Rs 1 lakh crore in July after being under the mark in the previous two months. The PMI has shown an upswing. The stock markets are climbing to new highs. Several sectors like auto, steel, cement, agriculture, construction and exports have shown healthy increase. However, the services sector continues to cause concern. With the festival and wedding season coming into picture in the months ahead, the numbers for Q2 and Q3 of FY 21-22 are likely to be more encouraging. Already, footfalls at malls and jewellery shops have shown a huge increase.

Everything now depends on how quickly India is able to fully vaccinate its adult population and how severe is the third wave - if and when it comes along. If vaccination targets are achieved by December and if the third wave is not severe, the Indian economy might well grow at a scorching pace this financial year and 9.5% might even be surpassed given the low base.