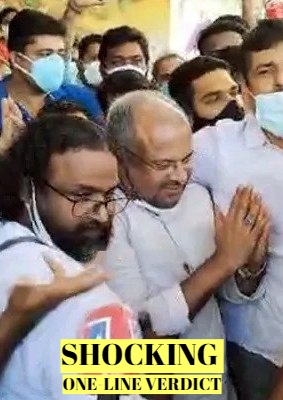 A sessions court in Kerala has acquitted former bishop of Jalandahar diocese of the Roman Catholic church, Franco Mulakkal, of the charges of raping a nun repeatedly. The court just gave a one-line order setting the accused free. Since the order was unexpected given the proceedings witnessed in the court and the judge chose not to explain how he arrived at the verdict, it was severely criticized by many and termed "shocking" by Save Our Sisters (SOS), an organization that is fighting on behalf of the nuns.

It is extremely distressing that the judge chose to deliver a one-line verdict in such a high profile case. The former bishop was accused of raping a nun 13 times in three years. There were many witnesses that were examined and the matter was investigated by Additional IG of Kerala Police S Harishankar who was then the police chief of Kottayam, where the alleged crime was committed in a convent. Mulakkal was charged under IPC sections 342 (wrongful confinement), 376(2)(k) (persistent sexual assault), 376(2)(n) (repeated rape of a woman), 377 (unnatural sex) and 506(1) (criminal intimidation).

There are several facts that are relevant in this case. First, it was not a one-off crime and was repeated multiple times over a period of three years. Second, the victim, being a nun, had not immediately gone to the police and had tried to get redressal through the internal mechanism of the Church. But her complaints to church authorities had not been looked into and she was forced to lodge an FIR in 2018. All this must be on record. Third, the offender was in a position of trust and given his position, capable of suppressing the internal case against him and later influencing and browbeating witnesses and/or destroying evidence.

Finally, in any case, it has been repeatedly stressed by the Supreme Court that the testimony of the victim, if found "trustworthy, unblemished, credible" and "of sterling quality" is enough to convict the accused, without the necessity of any corroborative evidence. It remains to be seen whether the Kerala judge explains how he did not find the victim's testimony fit enough to convict the accused. The prosecution and SOS have both said that they would appeal against the order. Hence, it is hoped that justice will prevail.

PS: Later on Friday, a 289-page judgment was delivered which said that the vicitm's testimony could not be relied upon as it was full of deviations, exaggerations and embellishments.

Read the full judgment at livelaw.in