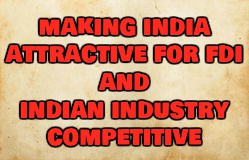 Finally, A Bold Reform To Shore Up The Economy

Finally, A Bold Reform To Shore Up The Economy

In a Twitter exchange with Kiran Mazumdar Shaw, MD of Biocon, a couple of days ago, Finance Minister Nirmala Sitharamam had quipped that she was working on the economy. If what was announced thereafter is taken as evidence, it proves that Sitharaman was indeed working with a vengeance. By announcing deep cuts and other adjustments in corporate taxes, the government has done four things - it has acceded to the long-standing demands of India Inc for lower taxes, it has considerably improved investor sentiment, it has announced its intention to move to a simplified tax regime that does not have a place for exemptions and incentives and it has made India a favourable destination for companies that were looking to relocate their manufacturing units from China in the wake of the damaging trade war between the US and China by bringing the tax rate on par with the existing rates in regional countries like Thailand and Vietnam.

The government has cut corporate tax to 22% from 30% for companies that do not avail exemptions and incentives or MAT, bringing the effective tax rate for such companies from 34.94% presently to 25.17%, which is a massive saving. On the other hand, for companies that are incorporated after October 1 and who start their projects before March 31, 2023, the tax rate will be as low as 15% (compared to 25% currently). The effective tax rate for such companies will be 17.01%, about 12 percentage points lower than the current rate. The lower rate for new companies will be disadvantageous to existing companies and some of them might be prompted to start 'new' companies to take advantage of the lower tax. While that can be prevented by applying the provisions of General Anti Avoidance Rules (GAAR) in the short term, the government will need to further rationalize rates in the long term to end this discrimination. Also, the government needs to revisit the surcharges which are a cumbersome addition and work against a simplified tax regime.

That India Inc and investors are happy with the rate reduction was proved when the Sensex showed its highest jump in a decade by moving up by 1921 points to end a week-long downward movement that eroded investor wealth. Apart from the announcements on the corporate tax cut (which would increase the profitability of companies and hence increase earnings per share), the market was also buoyed by the measures to "stabilize the flow of funds into capital markets", as Sitharaman put it. She announced the removal of the additional 20% tax on listed companies that had announced a buyback of shares before July 5. Also, the enhanced surcharge will now not apply to capital gains on the sale of shares, units of equity-oriented mutual funds or a unit of a business trust that is subject to securities transaction tax in the hands of high net worth individuals, HUFs, AOPs and others. Captains of the industry from Kumar Mangalam Birla to N Chandrasekaran and Uday Kotak all welcomed the announcements and said it will make Indian industry competitive.

The only negative impact (if one can call it that) of the tax cut  will be that it will reduce the earnings of the government by nearly Rs 1.45 lakh crore. When the government is already stressed financially and when tax collections are subdued, this is a huge amount. The government will have to look for other ways to shore up the finances and reduce, if not meet fully, the resultant shortfall. One option is to fast track divestment in shares of PSUs and think seriously of getting out of Air India and BSNL. If the tax cut results in priming up investments and consumption, some of the deficit is likely to be met by increase in tax collection.  It is also clear that the fiscal deficit target of 3.3% for the year is unlikely to be met. But in times of economic depression, some widening of fiscal deficit is not an unwelcome thing if the amount availed is not spent on undesirable populist schemes.