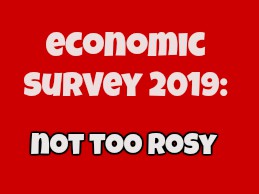 Economic Survey 2019: Acche Din Will Have To Wait

Economic Survey 2019: Acche Din Will Have To Wait

What one can read between the lines in the Economic Survey (ES) 2019 is that the economy is not going to turn around anytime soon; that though the intent is there yet the government will also not be able to do much to turn in around in the very near future and that the citizens must tighten their belts and wait for some more time for acche din as far as the economy is concerned.

Let us consider the extraneous and natural factors first. The country is experiencing a menacing summer and the monsoon is expected to be below normal, which is just a polite term to suggest that farm distress will be exacerbated. That, in turn, would dry up demand for goods from rural areas, leading to distress in factories. Then, the worldwide economic slowdown will also affect India in a big way. Exports will not grow at the expected rates. Oil prices are likely to remain firm and might even touch higher levels as OPEC and Russia have decided to cut production. India is already in a soup as it has no access to Iranian oil after the US sanctions on Iran.

Internally, the ES suggests investment, mainly private investment, will be the driver of growth. But in the absence of demand, will entrepreneurs invest? The major investment must first come from the government, largely in infrastructure. Once large sarkari investments are made, jobs will be generated and factories will get orders. The chain effect will generate more jobs. Disposable incomes will rise, leading to demand for goods and services. Only then will the private investment be forthcoming. But since the government is constrained about keeping the fiscal deficit in check, where will the money come from?

The absence of demand has badly affected sales of vehicles, both four and two-wheelers (with reports of numerous dealerships across the country downing shutters) and consumer durables, to name just two domains. This, in turn, has affected tax collection, with GST collections being below expected levels for three successive months now. If the government does not get the revenue it will have to borrow to invest or divest in state-owned enterprises. Obviously, the latter route is more prudent and practical. The government must fast track the divestment process and get out of companies that are draining it's resources.

The idea to encourage MSME (nourish dwarfs to become giants, as the ES grandiosely proclaims) is good. It is true that the MSME sector has the potential to create job opportunities exponentially, on its own and also by providing downstream and upstream opportunities to other entrepreneurs, but it all depends on the demand for goods and the flow of bank credit to such enterprises. Banks have always treated the sector negatively (and the bad loan stress will make them more stringent now) and in the recent past, the RBI even spurned the government efforts to ease the flow of credit to the sector.

In essence, if the economy is to be turned around fast, the government will have to act as the principal player. It will have to find the money to make investments. Divestment is the best possible route, along with cutting the flab from numerous departments. The government must also seriously think about earning from unused assets in entities such as the Railways. It must desist from throwing good money after bad in Air India, BSNL and MTNL, to name just three guzzlers of public resources. It should not let the interests of a few lakh employees (who should be provided for by other means) of these enterprises come in the way of prudent economic policy that will benefit the entire nation. Borrowing must be the last resort. The PPP route must be revived and made attractive for private players to come forward. Once demand rises, private investment will also start to flow and tax collections will improve to ease the pressure.