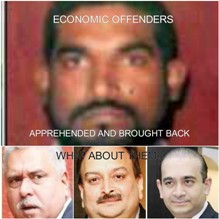 Holding an extreme view and carting the ball out of the park is what interests him most. He is a hard hitter at all times. Fasten your seatbelts and read. View all posts by this Author
It is good that a beginning has been made in bringing back economic offenders who had fled India. That Mohammed Yayha has been apprehended in Bahrain after an Interpol red-corner notice was issued and that India managed to convince the authorities there to deport him just shows that what the government can achieve if there is will. But this instance shows that similar will is not present in other high profile cases, although it may be that Bahrain was more cooperative than UK, the Caribbean countries or other countries where the likes of Vijay Mallya, Mehul Choksi and Nirav Modi have fled.

Although India is pursuing most of the cases abroad, not much headway is being made. Mallya is fighting his cases in UK courts although the banks have got many favourable decisions in respect of attaching his properties abroad. The same is the case of Nirav Modi. But that will neither solve the problem nor deter others. As long as these big fishes are not apprehended and brought back to face trial in India, the public perception will remain that they were tipped off and allowed to flee.

Hence, the government must reexamine its strategy and exert all kinds of legal and diplomatic pressures on countries where these offenders are believed to have fled. In an election year, this is going to be a hot topic. The opposition is going to pan the government for this lapse. Hence, it is required that the government unleashes everything in its armoury to bring them back and clear its name. This government claims to be corruption-free and unsupportive of crony capitalism. Now it has to walk the talk.