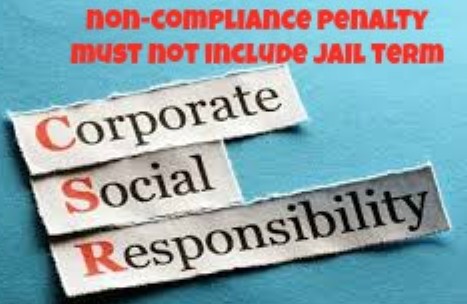 Drop Jail Term As Penalty For Non-Compliance With CSR Norms

Drop Jail Term As Penalty For Non-Compliance With CSR Norms

If the Finance Ministry had a committee working on how to make Corporate Social Responsibility (CSR) more effective and meaningful and make companies comply with it, what was the rush to get the punitive amendments passed in Parliament? Just a couple of weeks after the amendment to prescribe jail terms for not meeting CSR requirements (which obviously raised hackles in the corporate world and legal circles), the committee, headed by Corporate Affairs Secretary Injeti Srinivas, has said that jail terms are not the answer and has suggested fines and putting the funds in an escrow account as alternatives. It has also recommended that CSR expenditure be allowed as a deduction from taxable income.

The committee has sensibly recommended that non-compliance should be a civil offence and it should be de-criminalized. It has suggested an increased fine of up to Rs 1 crore instead of Rs 25 lakhs as proposed in the amended Companies Act. It has also proposed that the unspent CSR funds should be allowed to be carried forward for three to five years by putting them in a separate account. The committee said in the report that "CSR is a means to partner corporates for social development and such penal provisions are not in harmony with the spirit of CSR." This is the line that the government should ideally adopt.

But figures with the Ministry of Corporate Affairs show that companies have been lax in complying with CSR norms in the absence of punitive measures. Nearly fifty percent of the companies that fall under the CSR bracket (having a net worth of Rs 500 crore or turnover of Rs 1000 crore or net profit of Rs 5 crore) failed to file reports of how they spent the mandated 2 percent of the average profits they made in the three previous years under CSR; or even if they spent a single paisa at all. If the legal provision is there, companies cannot be allowed to flout it. Businessmen only understand the language of money. So if hefty fines are imposed and the unspent funds are taken away from them, they will try their best to comply. Hence, punitive measures are welcome but criminalizing non-compliance is not one of them. The government must review the amendments and drop the criminal penalty clause.