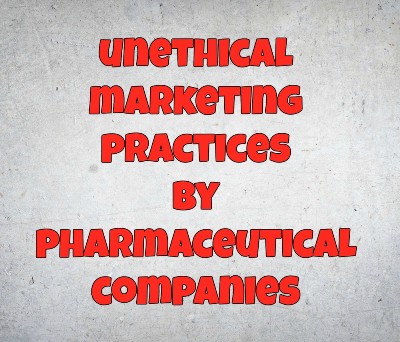 The Income Tax Department, deposing in a tax dispute case in the Madras High Court, has submitted that more than 8600 pharmaceutical companies had claimed deductions for freebies given to doctors under the heads "sales promotion expenses" and "gifts" in the last assessment year. This is despite the fact that providing such freebies or any kind of inducement to doctors to prescribe drugs of a particular brand is prohibited by law. This matter has been regularly grabbing headlines without a solution being found. Neither the self-imposed guidelines (grandiosely named Uniform Code for Pharmaceutical Marketing Practices) of the pharmaceuticals industry nor the presence of associations and regulatory bodies have made such companies stop the practice.

Considerable outrage had erupted when an NGO, Support for Advocacy and Training to Health Initiatives (SATHI), had published a report in August last year which highlighted the unethical marketing practices by companies and its gleeful acceptance by many doctors. The report confirmed (although it is common knowledge for many years) that pharma companies provided doctors with gifts ranging from laptops, cars and foreign holidays to even services of women for prescribing their brands. The report had even caught the attention of Prime Minister Modi who had then asked pharma companies not to give gifts to doctors. But there is no evidence to suggest that they have heeded his advice.

In 2014, the erstwhile Medical Council of India had summoned 300 doctors from across the country to answer charges of having been "bribed" by a pharmaceutical company. Less than half appeared although the charge was very serious. It was found that an Ahmedabad-based company had bribed the doctors by offering them cash rewards, cars, flats, and foreign trips for prescribing its brand of drug formulations. This was apparent from the fact that the sales of the company zoomed from zero to Rs 500 crore in just five years. Moreover, such practices went on despite the fact that the same drug formulations were available in the market at cheaper rates from well-known companies as Cipla, Ranbaxy, Sun, Aristo, Alkem, Zydus, and Cadila. Nothing much came out of the hearings as the MCI, as was its habit, just rapped the knuckles of errant doctors without suspending their licenses. Suffice to say, the offense continues with gay abundance.

The government must act in multiple ways to curb this practice which is unethical as well as dangerous. Doctors who choose to be agents of pharma companies often prescribe unnecessary and costly drugs, including antibiotics, just to 'earn' commission. There was a proposal to make it mandatory for doctors to prescribe medicines by their generic names and not by brand names. But it never saw the light of day, ostensibly due to the pressure tactics of the powerful cartel of big pharma companies. There is also a drawback in writing prescriptions with generic names - the commission that is now being paid to doctors will be then paid to the chemist or pharmacy owner who will then push the brand that offers them the heftiest margin. Hence, there is no easy solution to the problem and the government must think of out of the box to stop this unethical marketing practice.