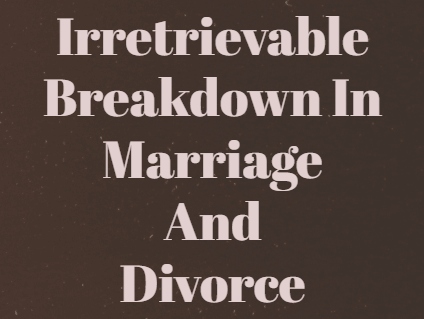 Divorce Is The Best Option For Irretrievable Broken Down Marriages

Divorce Is The Best Option For Irretrievable Broken Down Marriages

In line with earlier judicial orders, a division bench of the Punjab & Haryana HC has once again reiterated that if a marriage has broken irretrievably, it is wrong to think that judicial intervention can set it right. The court said that since marriage involves "human sentiments and emotions", their drying up offers little chance of them springing back to life "on account of artificial reunion created by court decree", expressing the same logic as used in K Srinivasa Rao vs D A Deepa by the Supreme Court in 2013.

This position has been stated in earlier judgments too, more specifically by the Madras HC in Salome vs Dr. Prince D. Immanuel. In that judgment, the court had cited K Srinivasa Rao vs D A Deepa, Naveen Kolhi vs Neelu Kolhi, Durga Prasanna Tripathy vs Arundhati Tripathy and Manisha Tyagi vs Deepak Kumar and other cases to conclude that although irretrievable breakdown of marriage is not a ground for divorce the Supreme Court has repeatedly invoked its special powers under Article 142 of the constitution to render complete justice to the parties in such cases.

The Supreme Court had, in Reynold Rajamani and another vs Union of India and another, held that "over the decades, a more liberal attitude has been adopted, fostered by a recognition of the need for the individual happiness of the adult parties directly involved. But although the grounds for divorce have been liberalised, they nevertheless continue to form an exception to the general principle favouring the continution of the marital tie. In our opinion, when a legislative provision specifies the grounds on which divorce may be granted they constitute the only conditions on which the court has jurisdiction to grant divorce. If grounds need to be added to those already specifically set forth in the legislation that is the business of the Legislature and not of the courts. It is another matter that in construing the language in which the grounds are incorporated the courts should give a liberal construction to it. Indeed, we think that the courts must give the fullest amplitude of meaning to such a provision. But it must be meaning which the language of the section is capable of holding. It cannot' be extended by adding new grounds not enumerated in the section."

When it is abundantly clear that the parties to the marriage union, either one or both, are no longer interested in continuing with the union and are bent on creating circumstances that lead to making life hell for the other, it is best for courts to grant then a divorce so that they can lead the rest of their lives happily. A failed marriage is a pain not only to the couple but also to their children and their families. Hence, it is better to end it if there is no hope of a reunion. Thus, although it is true that irretrievable breakdown of marriage is not a ground for divorce in the Indian Divorce Act, 1869, the legal thinking has veered towards granting divorce in such cases (some of which are involved in litigation for years) to end the misery.