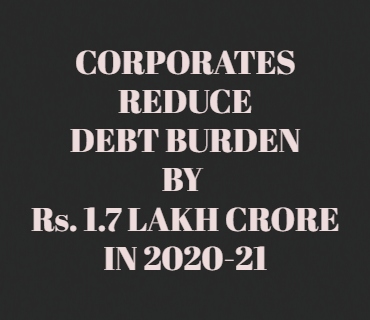 When times are tough and uncertain and business is bad over a longish period, cost saving becomes a prime focus area for companies. Companies begin put investments on hold or even pull back, reduce the interest burden by repaying loans and look for cheaper finance by hitting the capital market. An SBI research report shows that the Covid crisis in the economy has made many large borrowers across several industries repay their loans and reduce the debt burden to cut costs. The report says that more than 1000 listed entities across 15 sectors have reduced their debt by a staggering Rs 1.7 lakh crore in 2020-21. As a corollary to this, these 1000 companies have shown cash and bank balance which is 35% higher in March 2021 compared to last year.

The repayment of loan by corporate entities has resulted in a massive slowdown in credit growth in 2020-21. It also means that although banks are flush with funds, there are no takers as companies are following a conservative approach in these uncertain times by putting off investment in expansion or starting new projects. SBI chairman Dinesh Khara has said that corporate have turned risk-averse.

But do companies have a choice? The economy is showing no signs of any substantial recovery. Although the second wave has receded, there is talk of the third wave hitting sooner or later. The country is still not sure how fast and how soon it will be able to fully vaccinate at least 60-65 percent of its population. People have lost jobs and are still losing them. Others are facing cuts in salary. They do not have money in their hands. Demand is unlikely to pick up anytime soon. The government has not heeded to requests of making huge investments in infrastructure projects to kick-start the economy. The scenario is pregnant with negativity. Hence, the companies reducing debts and putting investments on hold have taken a wise decision. It is better to let the bad times pass and be well prepared to take advantage of an upswing, as and when it happens.