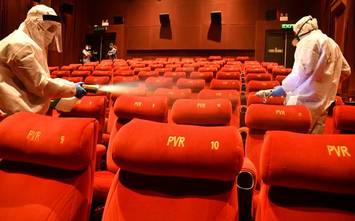 Cinema Halls Should Not Be Allowed To Reopen Now

Cinema Halls Should Not Be Allowed To Reopen Now

The Information and Broadcasting ministry has recommended reopening of cinema halls from August, subject to the approval from the Home ministry. It has prescribed certain rules that the hall owners will have to adhere to. Apart from the general sanitizing and physical distancing norms for all public places, cinema halls will have to keep alternate seats vacant in the first row and then the whole of the next row vacant and proceed in that manner. That would mean they would be allowed to have only 25% of the patrons against the number of seats they have.

Many cinema hall owners' bodies have rejected this formula and have recommended waiting for the reopening until at least 50% of the seats can be filled. They said that this formula was worse than keeping the halls closed. If the cinema hall owners are not allowed to increase ticket rates, they will suffer a huge loss for every show they run. But if tickets are priced higher, audiences might not show up in good enough numbers to make it a viable proposition. Hence, not many owners are enthused by the I&B ministry's initiative.

Further, the ministry did not specify whether food and beverages would be allowed to be sold inside the cinema halls. It is no secret that the highly overpriced F&B services are the backbone of multiplexes. They are not likely to reopen if these are not allowed. But carrying food inside the auditorium runs its own huge risk as people will be touching several items and then leaving them below their seats. The cleaning staff just removes the items but does not sanitize the area. In the new normal, it would be necessary to sanitize the auditoria after each show and that will add to the costs and delay the shows, limiting the number of shows that can be held each day. That would further reduce income.

The I&B ministry's move is ill-advised. Since India is likely to see Covid-19 cases peaking in September, a call on reopening the cinema halls must be taken only in the first week of October. With nearly 50000 thousand cases being reported every day, there is no point in opening potential new hotspots. There is no way to allow viewers on 50% of the seats without doing away with norms and there is no way the halls can make a profit by selling only 25% seats. Hence, it will be better to keep the halls closed until September.