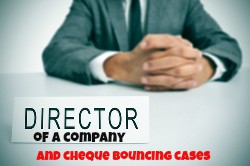 Editor-in-Chief of indiacommentary.com. Current Affairs analyst and political commentator. View all posts by this Author
A limited company is a separate legal entity in the eyes of law. Still, it is run by living people. Hence, the law provides a remedy to move against the directors who run the company, in addition to moving against the company, in certain cases. Cheque bouncing cases under Sections 138 & 141 of the Negotiable Instruments Act (NI Act) fall under this category. It is expressly provided in sub-section 1 of sec. 141 that if the person committing an offence under section 138 is a company, every person who, at the time the offence was committed, was in charge of, and was responsible to the company for the conduct of the business of the company, as well as the company, shall be deemed to be guilty of the offence and shall be liable to be proceeded against and punished accordingly. If a director was in charge of the affairs of the company at the time a cheque was issued and if it was subsequently returned unpaid on presentation in due course of business, the company and the director will both be punishable under the said sections of the NI Act, in addition to other laws in force.

The Supreme Court, in the recent judgment in the case A R Radhakrishna versus Dasari Deepthi & others, granted leave to the appellant by overruling the order of the Andhra Pradesh and Telangana High Court that had quashed his complaint against the directors of a company in a cheque bouncing case. The court reiterated that "in a case pertaining to an offence under S. 138 and S. 141 of the Act, the law requires that the complaint must contain a specific averment that the Director was in charge of, and responsible for, the conduct of the company's business at the time when the offence was committed. The High Court, in deciding a quashing petition under S. 482, Cr.P.C., must consider whether the averment made in the complaint is sufficient or if some unimpeachable evidence has been brought on record which leads to the conclusion that the Director could never have been in charge of and responsible for the conduct of the business of the company at the relevant time. "

In the instant case, the appellant had moved court when 7 cheques issued to him by M/s. Dhruti Infra Projects Ltd and signed by the authorized signatory, who was the managing director, on behalf of the company, were returned unpaid by the bankers with the remark that the payee had stopped payment. The counsel for the respondents contended that are only non­executory Directors of the company neither playing any role in the day-to-day business of the company nor being in charge of the affairs of the company. But the court was not convinced. It said that "a perusal of the record in the present case indicates that the appellant has specifically averred in his complaint that the respondent nos. 1 and 2 were actively participating in the day-today affairs of the accused no.1  company. Further, the accused nos. 2 to 4 (including the respondent nos. 1 and 2 herein) are alleged to be from the same family and running the accused no.1  company together. The complaint also specifies that all the accused, in active connivance, mischievously and intentionally issued the cheques in favor of the appellant and later issued instructions to the Bank to "Stop Payment". No evidence of unimpeachable quality has been brought on record by the respondent nos. 1 and 2 to indicate that allowing the proceedings to continue would be an abuse of process of the court."

This order of the Supreme Court clearly establishes two things. First, if a cheque has been issued by a company and if it is proved that the director signing the cheque had been in charge of the affairs of the company at that time, both the company and the director are liable to be punished under the applicable sections of the NI Act. Second, High Courts cannot indiscriminately use the power granted to them under section 482 of the CrPC to quash criminal complaints on the presumption that it might lead to an abuse of the process of the court. They must do so only if they find evidence to suggest that any continuation of the case would lead to an abuse of the process of law. There was no unimpeachable evidence before the Andhra Pradesh and Telangana High Court in the instant case to suggest that the director who issued the cheque was not conducting the day-to-day business of the company. Hence, its use of sec. 482 of the CrPc was erroneous in this case. The apex court set aside the order of the high court and asked the trial court to decide the case on merit without being influenced by any observations in its present order.