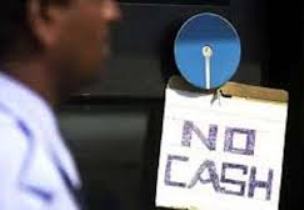 View all posts by this Author
Once again, there is a cash crunch in the country. No cash boards at ATM, a common sight during the period following demonetization, are back with a vengeance. Several states have been experiencing shortage of cash in both urban and rural centres. The finger of suspicion has fallen on the RBI. Has the RBI or the finance ministry actually squeezed the supply of cash? The government denies this, saying the crisis is temporary as there has been unusually high demand in some areas. To tide over the situation, the government has immediately started printing more notes, especially in the Rs 500 denomination.

There are several reasons why the cash crisis has happened. One is the reported hoarding of Rs 2000 notes by the public. The other is that scared by the imminent passage of FRDI Bill, people are withdrawing more cash from bank accounts than they usually do. The third is that in the last few months, while term deposits with banks have fallen, lending has increased. Lastly, with cash ruling the roost in elections, politicians in poll-bound Karnataka and possibly Madhya Pradesh, are also hoarding cash. Police have already seized Rs 7cr cash in Belagavi.

But there could be two other reasons for this. The first is that due to problems the people were facing in exchanging high value notes of Rs 2000 and Rs 500, the RBI had asked all banks to recalibrate the ATMs to dispense the newly introduced Rs 200 and Rs 50 notes. It had also started printing more Rs 200 notes than Rs 500 and Rs 2000 notes. The ATMs were also stuffed more with Rs 200 notes. This has unwittingly fuelled the current crisis. In order to ease one problem (that of having an intermediary denomination to facilitate easy exchange of high denomination notes) another problem (that of cash crunch) has arisen.

Further, it also needs to be kept in mind that ATMs are serviced by private agencies and are just one source of dispensing cash. To understand whether there actually is a cash crunch, one also needs to find out the availability of cash with bank branches. Till date, no reports have emerged saying customers were not allowed to withdraw cash from branches due to shortage of notes. Obviously people are inconvenienced when ATMs run dry as not everyone goes to the bank nowadays, but people who plan their expenses withdraw a big sum from banks for monthly needs and use ATMs only for emergencies. They will have no problems.

Apart from printing more notes, the RBI needs to manage available cash better to tide over the present crisis and also to ensure that this does not happen again. At all times, branches have residual cash after banking hours. This can at least be put in the ATMs which are located on the premises of the branches and which are serviced in-house. The branches can replenish their stocks from the currency chest first thing next morning. This will go a long way in better management of cash and make it available for customers after banking hours. There are other ways which the RBI knows better and it should use all of them to make sure that citizens do not have to face the no cash boards.