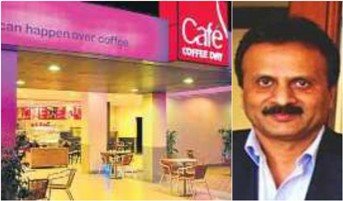 The suicide of V G Siddhartha, the founder of the coffee chain Cafe Coffee Day, is shocking. That a person who seemed so successful, with the outlets of his coffee chain everywhere, could be so deeply disturbed is equally disturbing for others. It shows that there is a side to business ventures that is hidden from the public eye, at least from those who do not read business newspapers or even the business columns of daily newspapers.

To almost every common citizen, Cafe Coffee Day seemed to be a successful venture. The common refrain would be, "if they are not making money how are they opening new outlets every month?" or "just look how much they are charging for a cup of coffee". But little did these people know that opening outlets is driven more by competition than by making money (even if one has to borrow at usurious rates to open new outlets) and charging Rs 110 for a cappuccino is sometimes not even enough to pay the prohibitive rents, electricity bills, staff salaries and advertising costs, to name just a few operating costs.

But the way Siddhartha's death is being linked to the so-called "tax terror" is not good for the business environment in the country. Just because he wrote in his parting letter (although the letter's veracity is being disputed) that he was being harassed by taxmen (or more specifically, "previous DG, income tax") doesn't mean he was right. That was his point of view. Almost everyone disputes the demand for tax from the Income Tax department and thinks it is excessive. That is why the law provides that a distressed taxpayer can approach appellate tribunals and the courts for redress. But admitting to having concealed income, signing a document confirming that and then not reporting it in income tax returns is a crime. Further, paying just a part of the assessed tax will also not do. If he was aggrieved, he should have approached the courts. Any subsequent effort by the IT department to recover tax dues cannot be called harassment or "tax terror" by any stretch of the imagination.

There is a huge support system for entrepreneurs - at home, amongst friends and in the business world - although entrepreneurship is often undertaken on a lonely path. Siddhartha came from a family with strong political links (he was the son-in-law of SM Krishna, former Congressman now with the BJP who was also a former chief minister of Karnataka) and was hence well-connected. He wrote that "private equity partners" were forcing him to "buy back shares". But he also admitted in the above letter that he did not tell about his mounting troubles to anyone. "My team, auditors and senior management are totally unaware of all my transactions" is what he claimed in the letter. His financial troubles were known to almost everyone in the business circles. Then, obviously, he meant to say that the transactions he undertook to tide over the problems were kept hidden. If that is true, it was a cardinal mistake. Keeping troubles hidden is a sure way of inviting more and more serious troubles. Problems can find a solution only through discussions with the right people. It is being reported that Siddhartha was looking for a short term loan of Rs 1600cr days before he took the final step, but no one was willing to lend him that kind of money.

The plain and simple fact is that Siddhartha let himself get into a vicious debt trap. As his troubles multiplied, he chose to hide it from everybody. Instead of getting advice on how to restructure the debt or even the business, he kept on borrowing more and perhaps more and more from dubious sources. In the end, the pressure was too much for a lonely man to bear and he took his life. The biggest lesson to be learned from this is that although success should always be highlighted, failures should never be hidden. Debt traps should be avoided. And as far as possible, troubles should be discussed with the right people to get solutions. Siddhartha will be remembered as a successful entrepreneur who perhaps made wrong choices which led to mistakes and then avoided getting professional advice to rectify those mistakes.