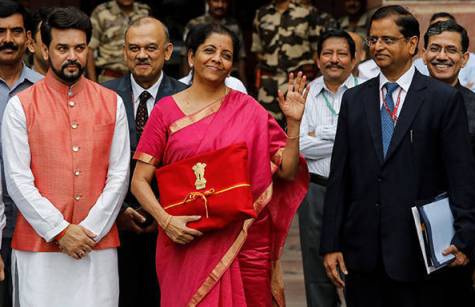 Budget: Intention Without Funds Is Like Trying To Grow Trees On Barren Land

Budget: Intention Without Funds Is Like Trying To Grow Trees On Barren Land

Finance Minister Nirmala Sitharamanâs first budget and the NDA first in its second innings, scores very high on intent but fails to provide numbers to back it up. It indulges in fudging of figures to achieve goals on paper, something that should be sacrilege in accounting but which is now accepted as a matter of fact in government accounting in India.

The interim budget presented by the then finance minister Piyush Goyal had estimated the nominal GDP growth this year at 11.5 percent or Rs. 210.07 crore. Without any explanation or any buoyancy in either the economy or the tax collection figures, Sitharaman has raised it to 12 percent and brought Rs 93168 crore more in the books. She has done it mainly to keep the fiscal deficit in check and pompously announced that she has reduced the same to 3.3 percent. But when the year closes, these figures will not be maintained - the nominal GDP growth will be much below 12 percent and the fiscal deficit is likely to shoot up to 3.4 to 3.5 percent.

The basic problem before the government in the times of economic slowdown is to get the money to fund the schemes. It is a Catch-22 situation â without the money the economy cannot be kick-started and without the kick-start where will the money come from? Sitharaman has been candid enough to admit that there is no money to fund her plan to invest Rs 100 lakh crore in infrastructure in the next five years. She has thus proposed an expert committee that will study how to get the money.

The government got a massive mandate in the recent elections. It could have held the economy by the scruff of the neck and unleashed big bang reforms. That it has chosen not to do so indicates that this is a consolidation budget â a budget that prefers to wait and watch which way the wind blows (locally as well as internationally) before making the necessary interventions. Still, the budget has many innovative interventions for the financial sector which is most in need of reforms. If they work out well, one can expect some big bang reforms, either in the middle of the year or in the next budget.

The interim budget presented by Piyush Goyal had been termed as the largesse budget as it was presented just before the elections. In that sense, nothing further could be expected from Sitharamanâs first budget. That she has still managed to come up with excellent measures such as faceless electronic scrutiny of income tax assessments, providing a lifeline for NBFCs, allowing for government borrowing in global markets, reduce the plethora of labour laws into just four codes and relief to start-ups shows that the intention was there. But the challenges before the economy are many and varied. Sitharaman will have to consistently do better than this.