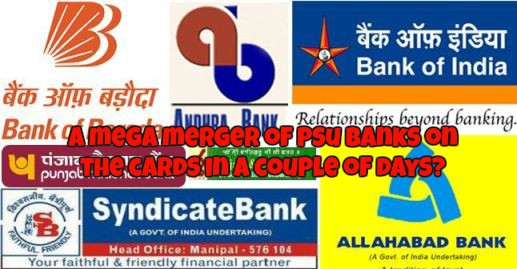 Breaking: Will There Be Mega-Mergers Of PSU Banks In A Couple Of Days?

Breaking: Will There Be Mega-Mergers Of PSU Banks In A Couple Of Days?

A freelance journalist and researcher, Pratim Ranjan Bose (@pratimbose), has tweeted that all PSU bank officers have been asked by the government to remain available for duty on Saturday, 10th August and Sunday, 11th August. This, he says, points to a major disruption in the banking sector. He says there might be a merger of PSU banks to create 4 or 5 mega entities on the lines of China. He also reports that the PSU bank chiefs are having a meeting with the Department of Financial Services under the Finance Ministry, after having met Finance Minister Nirmala Sitharaman a couple of days ago. He also reports that tests have been carried out to synchronize the core banking CBS systems of which there are two kinds in use. The SBI and some other banks use TCS developed BaNCS while the Bank of Baroda and some others use Finacle developed by Infosys.

If this report turns out to be true and a major disruption in the form of mega-mergers is carried out, the government would have made its first big move in the financial services sector. Indian PSU banks have eroded most of their capital due to bad loans. The funds needed for recapitalization are huge and unavailable. Hence, merging them to form big entities will solve many problems, provided economies of scale are availed, multiple branches are closed down and staff strength whittled down to the optimum required. These banks will be able to compete with their global peers and not shy away from global deals. If the banking system is cleaned and if banks start lending again, the economy might yet recover from the debilitating state it is in now.

Bail Is Increasingly Becoming The Exception

Maja Ma: Fails To Do Justice To The Topic