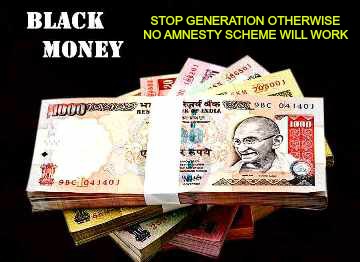 Editor-in-Chief of indiacommentary.com. Current Affairs analyst and political commentator. View all posts by this Author
The NDA governments Income Declaration Scheme (IDS) has generated undisclosed income of just Rs 65,250 cr with an average ticket size of Rs 1 cr. This is much below what was expected. Prior to the start of the scheme, the IT department had sent out notices to more than 7 lakh people asking them information about financial transactions that seemed to have escaped the tax net. That was a kind of pressure generated on them to come clean during the IDS window. Since less than 65000 thousand have chosen to come clean the scheme must be said to have met with only moderate success.

The biggest reason for the failure must be the high rate of tax and penalty that was sought to be imposed on the declared income. Similar schemes in other countries with low tax and penalty had seen much better disclosures there. Other reasons include the low credibility of the IT department in keeping its promise of no further enquiries in the sources of the declared income and cockiness on part of the wealthy that they will not be caught. There is no doubt that the economy is saddled with hidden income that is substantially higher than what was declared. The tax department continues to lose massive revenue each year as corrupt bureaucrats, politicians, businessmen and professionals like doctors and lawyers continue to earn in black and do not pay taxes. The focus should now be on bringing such people under the tax net.

The government has made a beginning by trying to clamp down on cash transactions. The proposal to outlaw cash transactions of Rs 300000 and more and having tax collected on source at the rate of 1% on cash transactions above Rs 200000 are excellent measures that will reduce dependence on such transactions in the long run. Transferring subsidy through bank accounts is another measure that will reduce corruption and hence generation of blank money. But the department has to think of ways to bring the errant in the tax net, without which no scheme, however successful, can rid the country of black money.

To cite an example, if one were to go to any surgeon, the charges for a surgery would shoot up once one discloses that he is covered under medical insurance. A friend of mine was once quoted Rs 4000 for a small surgery, but when he disclosed that the payment will be made by the insurance company, the doctor quoted Rs 10000 for the same operation. Doctors normally do not issue any receipt for the fee they take. A normal general physician in a metro sees not less than 50 patients a day in the several chambers he keeps. At a conservative fee of Rs 150 per patient, he earns Rs 7500 per day. If he works 26 days a month, he earns about Rs 195000 per month. Almost all of it is earned in black and it is doubtful if he pays more than a token amount as tax.

The same is the case of lawyers. Let us take the case of a normal lawyer in a civil or criminal court in a metro. They charge at least Rs 500 per date. They have dates of at least 10 to 12 clients in a day. If we take 20 days working, they earn about Rs 100000 per month. Like doctors, lawyers too do not issue any money receipt to clients and pay only token amount as tax. They will do so under the presumptive tax under section 44ADA of the IT Act as introduced for them by the Finance Bill, 2016, which again is an excellent measure. The same is the case of small businessmen who neither issue any bills nor maintain any books of accounts. Bigger businessmen and industrialists, especially in sectors like real estate, indulge in all kinds of fancy subversive accounting practices like under-invoicing sales and over-invoicing purchases or cooking up the books with false expenses to hide income. The case of bureaucrats and politicians is even murkier as they are not needed to issue any bills or receipts. Unless the generation of black money is stopped at these and other similar points of occurrence, no amnesty scheme is going to work.

Sensible opinion also points out that the fountainhead of all corrupt practices and generation of black money in the country is the political funding system which encourages donations to political parties in cash. The word donations is highlighted because most of it is kickback money that is ploughed into party funds as being received from donors. If all political funding was to be made through banking channels, the need for businesses and individuals to generate black money would partially evaporate, leading to a more transparent system. Further, politicians will have a moral high ground in cracking on tax defaulters as their own hands will be largely clean. Simultaneously, other electoral reforms like revising the upper limit for election spending need to be taken. Transparency and simpler rules in licensing, permits, permissions and assessment by bureaucrats and inspectors has to be put in place so that speed money is not required to be paid.

These are reforms crying to be carried out. We talk about third and fourth generation economic reforms to encourage growth in the country. But without these basic, first generation reforms to prevent generation of black money all other reforms will increase its generation to a monstrous level. Then, it will become impossible to control it, let alone eliminate it or bring it in the mainstream economy.