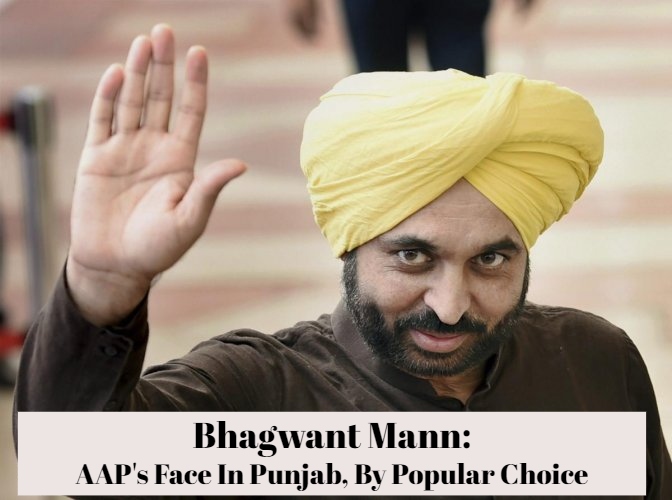 After a novel idea of conducting a tele-vote for selecting the candidate to be its chief ministerial face, the Aam Aadmi Party today declared that Bhagwant Mann has been overwhelmingly voted the popular choice in the vote where nearly 22 lakh people responded. Although Bhagwant Mann was also favoured by party chief Arvind Kejriwal, the party was wary about the response of state leaders as they were divided over the issue. While some leaders had supported Mann's elevation, many others, including some prominent leaders, had not made their preference known putting the central leadership in a quandary. With opinion polls showing AAP in a pole position, the party did not want to upset the apple cart by creating a rift and allowing the party's image to take a hit.

Back in September last year, the party had inducted five Punjab leaders in the national executive. At that time two Bhagwant Mann supporters had been left out.  Leader of the opposition in the state assembly Harpal Singh Cheema, Aman Arora, Baljinder Kaur and Sarvjit Kaur Manuke were appointed along with Mann. But two key Mann supporters, Kisan Wing President, Kultar Singh Sandhwan and Youth Wing president Meet Hayer were left out. That was seen an act to balance the various interests in the state leadership. Since then, as the party faced heat over declaring its face for the assembly polls, it chose to hold the tele-vote to let the people decide and tactfully avoided resentment in the state unit.

With Bhagwant Mann as the popular choice also having the backing of the central leadership, the rest of the state leadership will have no option but to rally behind him despite their reservations. But Mann will have to carry them with him in consultation with the national leadership to run an effective government. For the last five to six years, AAP has worked hard to create a solid image for itself in Punjab by showcasing its work in Delhi and promising to bring good governance to the state. It now remains to be seen whether it can take benefit of the anti-incumbency against the Congress and get a majority on its own or emerges as the single largest party in a hung house, in which case it will have to look for alliance partners among the smaller parties or take the support of independents to form the government.