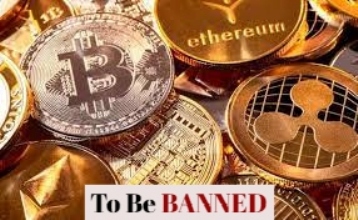 The government will introduce a bill in the winter session of parliament to ban all private cryptocurrency in India and lay down a framework for the introduction of official digital currency by the RBI. The Lok Sabha bulletin issued yesterday listed the The Cryptocurrency & Regulation of Official Digital Currency Bill, 2021, which it said will "allow for certain exceptions to promote the underlying technology of cryptocurrency and its uses."

This goes against what was suggested to the government in the recent meeting with experts and stakeholders it had called. The overwhelming opinion given to the government was that banning private cryptocurrency was not a viable solution as it would take the entire operation underground and away from regulatory scope. It was suggested that a regulatory framework must be worked out to ensure that the operations remained within the law and the consumer was protected.

But the government is going the China way where private cryptocurrency is banned. An indication of this was available when Prime Minister Modi, in his virtual address at the Sydney Dialogue, said that "It is important that all democratic nations work together on this and ensure it does not end up in the wrong hands, which can spoil our youths" and in the recent statements of RBI governor Shaktikanta Das who repeatedly expressed concern about the mushrooming of crypto exchanges and the lack of genuine information and promise of huge returns that was misguiding the common man into investing in cryptocurrency. But when the government said that it would come out with progressive and "forward-looking" regulatory framework for cryptocurrency, no one expected a complete ban.

While it is good that the government recognizes the immense utility of blockchain technology and would facilitate the introduction of official digital currency by the RBI, its decision to ban private cryptocurrency is regressive. Banning it is the sure way to ensure that it will fall in wrong hands. Although it is true that crypto transactions will have to be conducted through banking channels and once a ban is in place, no bank will allow investment in such exchanges and the exchanges themselves will be forced to close down, it is also true that there are ways in which people will still be able to invest in cryptocurrency from India.

Further, terror financing and money laundering, the two major reasons why a crypto ban will be introduced, will not vanish as they will most likely be conducted via offshore transactions. A new class of shady middlemen will come forward and use technology to facilitate such transactions at a hefty premium which would not be a constraint for those who wish to stash their ill-begotten wealth or get funds to create trouble in India.