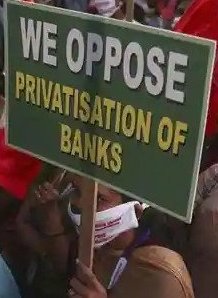 Bank Privatization Must Not Be Opposed Just On Ideological Grounds

Bank Privatization Must Not Be Opposed Just On Ideological Grounds

Bank unions called a two-day strike in March to protest against, among other things, the decision of the government to privatize two public sector banks. While it is the duty of the unions to protect the interests of their members and they are within their rights to strike work to highlight their grievances, they must also recognize that the way banking is done is changing all over the world and India cannot remain immune to that.

The practice being followed in financial markets all over the world, including China, is to have just a few large banks that are more efficient, have greater power and can compete on equal terms with their peers across the globe. Although India is different in the sense that the government has the responsibility of identifying priority sectors in line with its policies and ensure that banking funds are made available to these sectors easily and at attractive or subsidized rates of interest, this does not needs a plethora of small regional banks in this age of core banking.

The government has already merged several small and underperforming PSBs with their larger cousins. This has resulted in synergy and the reach of these large banks have multiplied manifold. There are still some small banks that underperform and are a drain on the exchequer. There is no need for the government to keep running them if it can find a private buyer who can pay an attractive price for them. The decision to sell these banks - starting with two such - is laudable. The earlier the government gets out of business, barring some strategic areas, the better it will be as it can then focus on developing the country better.

The government has already clarified that not all banks will be privatized. It has also said that the interests of the employees will be protected even in cases where privatization takes place. The unions have to believe the government and allow it to make these strategic sales in order to streamline the Indian banking system and bring it in line with what is happening around the world. They can protest and stop the sale if they find that the interests of the employees are being sacrificed. But protesting per se, or just on ideological grounds, is not right. The unions must first see the terms of sale and then decide their course of action.