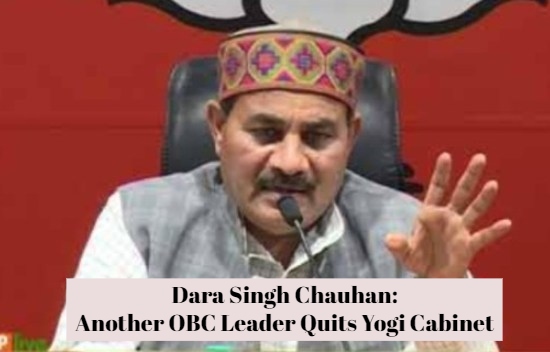 Another UP Minister Quits, Deepening The Crisis For The BJP In The State

Another UP Minister Quits, Deepening The Crisis For The BJP In The State

The BJP's diligently constructed house of upper caste and OBC votes in UP is breaking down. Dara Singh Chauhan, another minister in the Yogi Adityanath cabinet and an OBC leader, quit the BJP on Wednesday. S P Maurya and four others had quit on Tuesday. Do these leaders see the writing on the wall for the BJP and are deserting a sinking ship in time or are they being enticed by the Samajvadi Party (SP)? It seems that it is a combination of both as obviously being in government would have offered these leaders greater rewards. But they must be receiving negative feedback from their constituents and with the crowd swelling at each SP rally, think that the time has come for a change of colour.

It took all the wiles of Amit Shah to crisscross the state from 2014 onwards and bring together non-Yadav OBC leaders on the BJP platform. This resulted is a practically invincible vote bank and the BJP stream-rolled the opposition in 2017 state elections and then in the 2019 Lok Sabha elections. So what went wrong? Why is the carefully crafted strategy disintegrating at this most important juncture, when elections in UP are so crucial to the party?

Did the party not get wind of the way these OBC leaders were thinking? Why, then, did it not move in to control the damage? With the flight of these leaders, other will be emboldened and more defections cannot be ruled out. The farmers in west UP are already angry. The Yadav's traditionally vote for the SP. The Muslims in UP do not vote for the BJP. Now if the non-Yadav OBC votes are also taken away, the BJP will be left with only the upper caste votes and that would not be enough for it to come back to power. It would be interesting to see the strategy BJP adopts to manage this huge crisis.