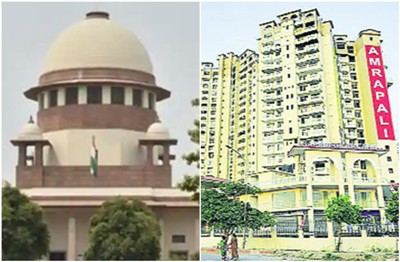 In a landmark judgment, the Supreme Court has recognized homebuyers' first right on projects of builders and has ruled that banks and other financial institutions can recover their dues from assets other than project properties. In the case of Amrapali Group, in which several writs were filed in the apex court seeking possession of around 42000 flats in Noida and Greater Noida area, the court also ruled that these projects would now be completed by the state firm NBCC which would receive a commission of 8 percent for its work. This order recognizes that real estate projects are largely funded by advance payments from homebuyers and hence they should either get the completed flats or should have the first charge on incomplete projects.

This is in direct contrast to what is prescribed in the Insolvency and Bankruptcy Code where secured financial creditors have the first charge under a waterfall mechanism. The court must have realized that home buying is a very big deal for an average Indian person and perhaps the single largest investment he or she makes in a lifetime. If either the money is gone or the flat is not delivered, the investor loses all he has. Hence, the court has gone against the formula in the IBC and provided relief to homebuyers.

The court had ordered a forensic audit of Amrapali Group. Following this, cases of large scale diversion of funds, the collusion of municipal authorities in the Greater Noida and Noida areas and a lot of other scams have come to light. Hence, the court has canceled the RERA registration of the group, ordered the Enforcement Directorate to register a money laundering case against the group's managing director Anil Sharma and other directors, canceled the lease granted by municipal authorities to all Amrapali projects and also stopped them from selling the group's properties to recover their dues. It has also asked the state and Central governments to take action against the group and the corrupt officials of the Greater Noida and Noida authorities.

Corruption in the real estate sector was previously limited to builders flouting land laws to change the status of the land to their advantage and municipal rules to build more than was permissible in order to make greater profits, apart from using sub-standard material or not giving everything they promised. The connivance of land officials and municipal authorities was never in doubt. In UP, as in most other states, the land mafia has spread its tentacles far and wide to emerge as the most politically patronized sector. All this was being done undercover and away from public glare and flats were by and large delivered to homebuyers, sometimes on time and at other times after some delay. But when the greed of the builders made them default on delivering projects, the courts came into the picture and these huge scams are being discovered in realty firms. The Supreme Court has done well to provide this huge relief to homebuyers. However, it remains to be seen whether the NBCC is able to complete the projects and homebuyers get their properties.