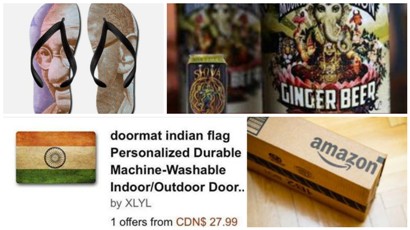 By our team of in-house writers. View all posts by this Author
Whats up with Amazon? Has it made it a habit to antagonize Indians? First it was the Indian flag themed doormats (of all things) and even before the controversy has died down, they have come up with flip-flops that feature Mahatma Gandhi.

When the doormats were spotted, MEA Sushma Swaraj threatened to cancel visas of Amazon staff in India if they were not immediately withdrawn. Amazon complied and issued an apology. But within days, the flip-flops were discovered.

Earlier, there have been liquor brands with pictures of Hindu gods and goddesses in Australia. There have been other instances of gross misuse of symbols that Indians hold in high esteem in other countries.

Hence, people who are responsible for passing the merchandise need to be sensitized. They need to be made aware with the fact that in certain countries, passions can be inflamed if certain symbols or pictures of icons are used inappropriately. Selling things which seem stylish to them can invite a huge backlash in such countries.

Amazon and others who use pictures of national symbols and iconic figures from other countries will be well advised to consult lawyers and social activists from those countries to verify whether they will hurt public sentiments there before allowing the use of such symbols.

But using the flag for doormats and Gandhis image on flip-flops should have been red-flagged by even the dumbest of supervisor. Maybe we expect people from other countries to be more knowledgeable about India than they really are.