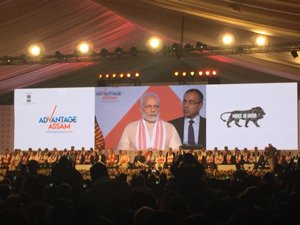 View all posts by this Author
Assam is the gateway to the North-East. But apart from that, the state is a lucrative destination to set up industrial units as ample land and cheap labour is available. Although the indigenous labour is not very skilled, migrants make up for that. Once big industries start coming in, skilling the work force will not be a problem. Against this backdrop, the decision of the BJP government in Assam to hold a Global Investors Summit titled Advantage Assam was timely and prudent. Given that previous governments had never thought it fit to highlight the state as an investment destination, this summit went a long way in correcting that negative perception.

Guwahati has also blossomed into a mega city and is highly cosmopolitan. It is also well connected by air, rail and road to the rest of India. Granted that civic infrastructure (open drains for one and frequent flooding during the monsoons) is woefully inadequate, but the smart city tag is going to change that in a few years. Guwahati also boasts of a thriving trading community and most companies have their regional offices in the city. Previously, they used to operate out of Kolkata.

Since every state is now showcasing itself as an attractive destination for investors, Assam would have fallen back if it had not taken this step, especially since Bengal is very aggressive on this front. Where Bengal scores on having a big pool of skilled workers, it loses on land issues, law and order and work culture. It is here where Assam can pit itself as superior. The success of the summit can be gauged from the fact that nearly 200 MOUs worth Rs 1 lakh crore were signed in two days. It is now upon the government to fulfill its commitments and pursue these MOUs to their logical end. Investments will transform the economy of the region and will generate huge employment opportunities.