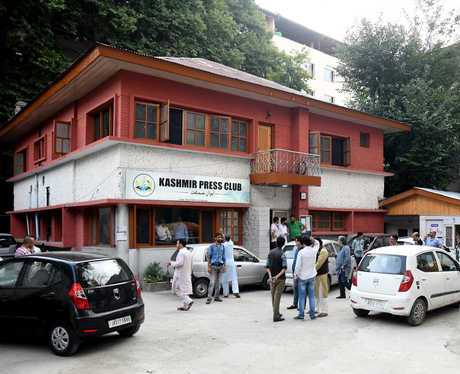 Action Against Kashmir Press Club: Cracking Down On Independent Journalism

Action Against Kashmir Press Club: Cracking Down On Independent Journalism

The way the Kashmir Press Club was closed down permanently shows that the NDA government, through the J&K administration, used its powers to silence an independent body of journalists. The people of J&K are going through a harrowing time ever since Article 370 was abrogated and draconian restrictions were imposed. It is their right to be truthfully informed about the goings on in the union territory. Further, trained and independent journalists are the best source of verified information which is otherwise distorted into fake, distorted and slanted news through WhatsApp and other social media channels. The government, instead of strengthening the hands of journalists who provide verified news, is encouraging the spread of fake and distorted news by forcibly closing down the press club.

Further, the incidents which preceded the closure clearly proved that the government was taking sides and trying to promote a section of journalists perceived to be close to it. The government says it was factional row but it is clear that it wanted its handpicked journalists to run the body, thereby compromising its independence. The outgoing governing body had scheduled elections in mid-February to elect the next body. But the government cancelled the registration of the club by citing an 'adverse' CID report that had 'questioned' the antecedents of the existing governing body members. Later, a group of journalists, supported by security forces, forcibly took over the premises. Finally, the government permanently cancelled the registration and took back the premises it had provided for the club to be set up.

In a region where the government is using force to get things done and where the democratic rights of the people are suspended, the importance of verified news from traditional and responsible media channels cannot be discounted. Any administrative action that closes down or even compromises such media channels or bodies that contribute news to such channels is likely to have an adverse effect in the long run. The government must recognize this and adopt a hands-off policy in such matters. In the instant case, it must restore the registration of the Kashmir Press Club, reinstate the premises and allow it to hold elections to elect a new governing body and function normally. As for the 'adverse' inputs received through the CID, it must either disclose the charges or stop using innuendos to defame journalists who are doing their work under immense pressure.

Feedback: We would love to hear your opinion about this article and India Commentary. Please email your opinions at editorialindiacommentary@gmail.com