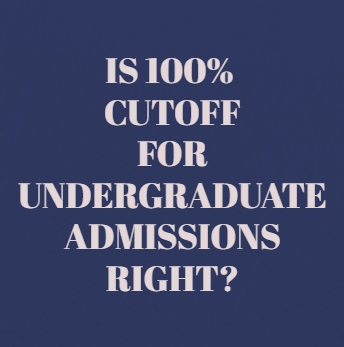 With the pandemic throwing the education system out of gear by not allowing physical classes and with exams not being held, processes have become difficult to maintain. Last year, just one college in Delhi University had set 100% as cutoff for admission to three of its undergraduate courses. This year, seven colleges have set the maximum cutoff for 10 such courses. Is this due to the fact that excellence in academics has suddenly spurted in India? That is not the case.

This is entirely due mainly to two things. The first is the generosity with which different boards have treated students in the pandemic year which has seen more than 9200 applicants for undergraduate colleges in DU getting the maximum from different boards. Since in the absence of year-end examination, the marking was done on a combination of factors, such high marking became the norm across India. But this is not good as it gives a false indication of very high standards of academic excellence.

The second reason is the gap in demand and supply. There are many times more applicants than there are seats in colleges. This situation is going to become worse as every year the number of applicants will increase. The government needs to establish more colleges and universities, both in the public and private sector. There is an urgent need for more undergraduate seats in quality institutions. It is only because some renowned institutions are swamped with applications that they are forced to keep high cutoffs.

But this has to change. The institutions too must not rely solely on board marks to admit students. There must be a system of admission tests. The government had announced a plan to run a common entrance test for undergraduate admissions to universities, to be conducted by the National Testing Agency, which could have offered a good alternative. But it has not come through till now. As long as a common admission test is not conducted, individual colleges can start their own with a low cutoff, say 80%, for those who can sit for it.